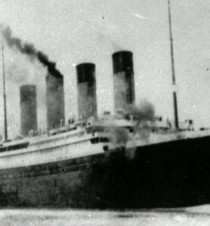 (CNN)Here’s a look at the “unsinkable” R.M.S. Titanic.

On April 10, 1912, the Titanic set sail on its maiden voyage from Southampton, England, to New York.
April 14-15, 1912 – The luxury liner hits an iceberg in the North Atlantic around midnight and sinks in less than three hours.
Approximately 1,500 people died and nearly 700 survived out of about 2,220 passengers and crew.
The Ship:
The estimated cost of construction was $7.5 million (over $400 million today).
At the time, the R.M.S. Titanic was the largest passenger ship afloat.
The ship’s length was 882 feet, 9 inches, and it weighed 46,328 tons. Its top speed was 23 knots.
The wreckage is located about 350 miles off the southeast coast of Newfoundland.
What was the cause?
In April 1912, there were about 300 icebergs in the North Atlantic shipping lanes, the most seen in the route between Europe and North America in 50 years.
The abundance of icebergs that year would also be something the Titanic’s experienced captain, Edward Smith, would not have predicted. He’d been sailing the North Atlantic for 26 years and had not reduced the Titanic’s speed despite receiving warnings of bergs ahead of his ship.
The iceberg punctured five of 16 supposedly watertight compartments designed to hold water in case of a breach to the hull.
Investigations at the time blamed Captain Edward J. Smith for going too fast in dangerous waters, initial inspections that had been done too quickly, insufficient room in the lifeboats for all passengers, and a nearby ship’s failure to help, according to Britannica.com.
Many maritime safety reforms were implemented as a result of the findings of the investigations.
Victims and Survivors:
There were 324 1st class passengers aboard. 201 survived.
There were 277 2nd class passengers aboard. 118 survived.
There were 708 3rd class passengers aboard. 181 survived.
There were 885 crew members aboard. 212 survived.
There were 13 postmen and musicians on board. None of them survived.
Captain Smith went down with the ship, and his body was never recovered.
Frederick Fleet, one of the crew members who first alerted Captain Smith to the iceberg, was rescued and survived.
Notable Passengers:
Survived –
– The “Unsinkable” Margaret (Molly) Brown – wife of a silver mine manager, helped command a lifeboat and nursed injured survivors of the Titanic.
– J. Bruce Ismay, Managing director of the International Mercantile Marine and one of Titanic’s owners.
– Henry S. Harper, of the firm of Harper & Bros.
Died –
– Colonel John Jacob Astor, member of the Astor family.
– Isidor Straus, merchant and banker, co-owner of Macy’s.
– Benjamin Guggenheim, member of the Guggenheim family.
– George D. Widener, son of P.A.B. Widener, Philadelphia businessman.
– Washington Roebling, whose uncle was a builder of the Brooklyn Bridge.
– Charles Melville Hays, General Manager of the Grand Trunk Railway.
– William Thomas Stead, famous journalist and publicist.
– Jacques Futrelle, journalist.
– Henry Birkhardt Harris, theatrical manager.
– Major Archibald Butt, military aide to President Taft and President Roosevelt.
– Francis Davis Millet, American painter.
Other Facts:
The facts surrounding the ill-fated maiden voyage permeate popular culture, spawning countless books, television specials, and movies.
“Titanic,” a 1997 James Cameron film based on the disaster, is the second highest-grossing film of all time, domestically and worldwide, earning over $650 million at the box office.
Timeline: (local time, based on the location of the ship.)
March 31, 1909 – Construction begins, as a design collaboration between William Pirrie’s firm Harland and Wolff and J. Bruce Ismay’s White Star Line, in Belfast, Ireland, and takes three years to complete.
April 10, 1912, 12 p.m. – The RMS Titanic sets sail from Southampton, England, on its maiden voyage, with approximately 2,220 passengers and crew.
April 10, 1912, 6:30 p.m. – Arrival in Cherbourg, France.
April 10, 1912, 8:1 p.m. – Leaves Cherbourg.
April 11, 1912, 11:30 a.m. – Arrival in Queenstown, Ireland.
April 11, 1912, 1:30 p.m. – Leaves Queenstown, raising anchor for the last time.
April 14, 1912, 11:40 p.m. – The Titanic hits the iceberg. Lookouts Frederick Fleet and Reginald Lee first see the iceberg and alert the bridge.
April 15, 1912, 12:40 a.m. – Captain Edward Smith gives the order to uncover the lifeboats and evacuate women and children.
April 15, 1912, 12:20 a.m. – The RMS Carpathia receives distress calls and heads to the site to help. It arrives at 3:30 a.m.
April 15, 1912, 12:45 a.m. – The first lifeboat is launched with 28 people on board out of a capacity of 65.
April 15, 1912, 2:20 a.m. – The Titanic sinks in less than three hours.
April 15, 1912, 8:50 a.m. – The Carpathia leaves for New York with 705 Titanic survivors onboard. It arrives April 18th.
April and May 1912 – Separate American and British investigations and official inquiries take place.
September 1, 1985 – Scientists from Woods Hole Deep Submergence LAB (DSL) in Massachusetts, led by Dr. Robert Ballard, and IFREMER, the French Institute Francais de Recherche pour l’Exploitation des Mers, led by Jean Jarry locate the wreckage of Titanic.
July 13, 1986 – Dr. Robert Ballard and his crew use the manned deep-ocean research submersible Alvin (DSV-2) to explore the wreckage. The Alvin is accompanied by a remotely operated vehicle (ROV) named Jason Jr. to conduct photographic surveys and further inspections.
2004 – Guernsey’s auctions off memorabilia and a few artifacts that had been passed down through the families of survivors from the ship, including an original menu that goes for about $100,000.
May 31, 2009 – The last known survivor, Millvina Dean, dies at age 97.
March 31, 2012 – The world’s largest Titanic attraction opens in Belfast, Northern Ireland, where the ship was built.
April 8-20, 2012 – The 100th anniversary of Titanic’s only voyage. The MS Balmoral traces the ship’s route from Southampton to New York and holds a memorial service on April 15 above the wreck.
March 2015 – A letter said to have been written by a mother and daughter once aboard the Titanic is displayed at the Titanic’s Belfast center in Ireland. The letter was purchased at auction by a couple who then loaned the letter to be displayed at the world’s largest Titanic exhibition for the next five years.
September 30, 2015 – The last known first-class lunch menu from the Titanic is sold at auction to a private collector for $88,000. Also auctioned: a printed ticket from a weighing chair located in the ship’s Turkish baths, which sold for $11,000, and a letter to the man who was alleged to have paid off the lifeboat’s crew, which sold for $7,500.