Factors leading to the construction of Vaaldam

Factors leading to the construction of the Vaaldam

Bibliography:
History of the Rand Water Board as printed in the publication “Vereeniging 1892 – 1967” the story of a South African town recording its growth during 75 years from a riverside colliery village to a major centre of the Republic’s industry. (Statistics are Circa 1967)
It was not long after the gold rush before the small streams on the Witwatersrand were unable to supply sufficient water for the prospector’s needs. Sir James Sievewright headed a syndicate, which was granted a concession to supply the area with water. In 1887 the Johannesburg Waterworks Estate and Exploration Company Ltd. was formed which sourced its water from the area.
Barney Barnato soon had a controlling interest in the company. Boreholes had to be sunk to meet the growing demand. About 6.8 million litres was supplied daily. A severe drought in 1895 raised the price of water to two shillings and sixpence a bucket.
Water was now being sourced from Zuurbekom and the Klip River. In 1902 steps were taken to form the Rand Water Board to replace the private companies and supply water from Springs to Randfontein. Using the Klip River and newly sunken boreholes at Zwartkoppies 10 million gallons was supplied daily. The Barrage was designed to provide an additional 10 million gallons a day.
The newly formed Rand Water Board developed its rights in the Klip River Valley, boreholes were sunk in the dolomite underlying the far Zwartkoppies and adjoining farms, and by the middle of 1910 the board was supplying 10 million gallons per day. It was now recognised that an ample supply of water for the Witwatersrand ultimately depended on developing a river scheme, and in 1913 they proceeded with the “Lindeque’s” scheme on the Vaal River.
The Vaal is the major tributary of the Orange River. It rises in the highlands of the then Transvaal and is the most important river draining the inland plateau. It is important as the boundary between this province and the Free State and its juxtaposition to the diamond mines of Kimberley and the gold and coalmines of the Northern Free State and Southern. 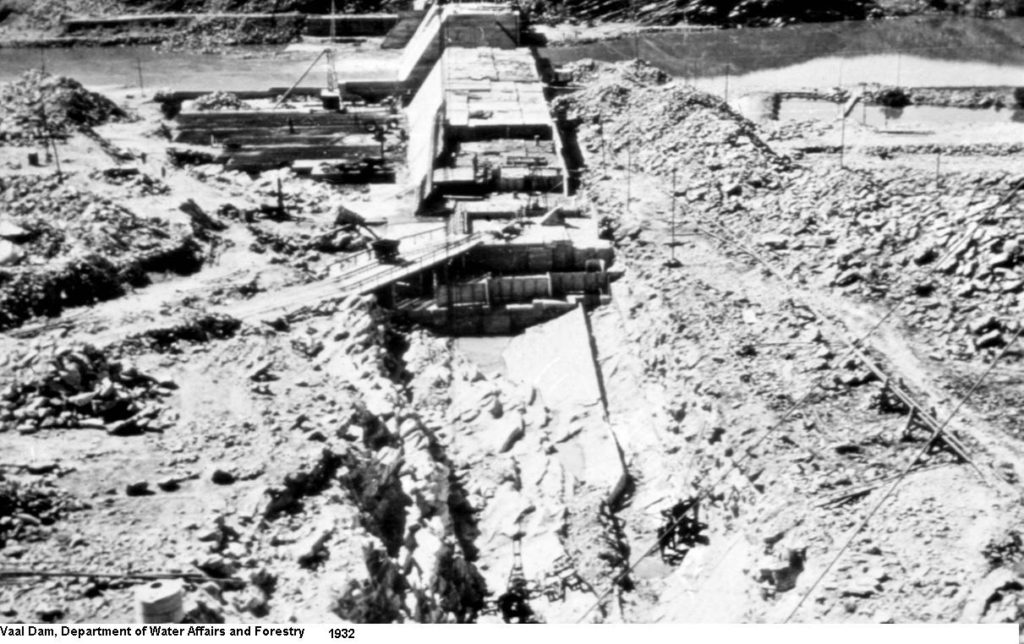 In terms of the Rand Water Board Supplementary Water Supply (Private) Act 1914, the Board decided to construct a barrage at the Lindeque’s site, 25 miles down stream from Vereeniging where the Vaal River had a width of 620 feet. This barrage was designed to provide an additional 10 million gallons a day, but the outbreak of the 1914 – 18 world war delayed construction until 1918. Work commenced on the 1,400 -ft wide barrage, as well as river intakes and the main plant in Vereeniging which included pumping plant, sedimentary tanks, filters and clear water reservoir.

VAALDAM
Construction commenced in 1934 after the promulgation of the Vaal River Development Act. No. 38 of the same year, and the wall was completed in 1938. As Minister of Agriculture, Deneys Reitz visited the site in 1935. He had also helped initiate the Vaal -Hartzscheme. As Minister of Land he had some years previously visited the alluvial diamond diggings along the Vaal nearby. The quarry, now part of the Deneysville Aquatic Club was the one used to build the original wall.
With the rapid expansion of in dustry and the development of the O.F.S. Goldfields the wall was raised some 6 meters in 1952, which included 60 sluice gates. In 1958 the wall was strengthened and raised a further 3 meters odd and the outlet and tunnel were built to feed Suikerbosrand purification plant. The water previously obtained from the Barrage had become so infested with bacteria that it was becoming difficult to purify.
The dam is the third largest in the Republic and boasts the longest shoreline of any dam as a result of the very flat area, which includes the confluence of the Vaal and Wilge rivers.
The dam is navigable up to the low-level bridge at Oranjeville and to Villiers and beyond up the Vaal River. The huge surface area at the Jim Fouche Resort area is very shallow and rapidly turns back to but a river when the level drops during dry seasons. Water is now also received from the Highlands Scheme and Sterkfontein Dam. It is interesting to hear that the next phase to increase the capacity of the Highland Scheme has been cancelled due to the expected minimal increase in population due to aids. In 1987 the dam dropped to some 13% and the island was connected to the main land. Hawaii, the ‘underwater island’ became a peninsula and Beacon Island came to view where a mass of seagulls nested. The weather here is varied and unpredictable as it is situated at the edge of the cyclonic belt, which brings the thunderstorms to the Witwatersrand. Besides the few tornadoes, winds of over 60 knots have been recorded. The general westerly winds are punctuated by strong easterlies which generate two meter waves that pound the Deneysville shores.
Besides otters and snakes and the occasional hippo the dam is populated by yellow tail, carp and barbel, which grow up to three meters in length.
The Vaal Dam monster?
Divers at the wall are real scared of them. Fresh water prawns have also been seen. The dam was commonly called Lake Deneys, but the name was ignored and still remains the Vaaldam.